I’m going to tell you a short tale about love, loss, and food. Some will call it a coming of age story while others will insist it was just dumb luck and a few naysayers will say it shouldn’t have happened in the first place. The thing we’ll all be able to agree on is that the world is a different place because of what transpired in the next few paragraphs.

Let’s cut to the chase. No, not the figure of speech – the literal chase. Behind the reins of a vintage mode of transportation is our protagonist. It’s a speed demon; a real speed racer. An odd fact about our protagonist, especially in the year 2011 (when this story takes place), is they are traveling by the four legged creature known as Equus ferus caballus. That’s a horse y’all!! Our protagonist (yeah I’m not gonna say their name yet) is riding a horse!

Now back to the chase. The horse is a blur with a human in the saddle. They’re being hunted by a whole gang of bos taurus. Those are cows y’all!!

**record scratch** our protagonist exclaims from the back of their trusty steed, “you’re probably wondering how I got into this predicament!” Next, we see a flashback (in a slight black & white tone) to a few minutes earlier where, while wrapping up a leading role in a new movie (at the time in 2011) called Transformers: On The Farm (that still hasn’t been released wtf), our protagonist gets a 3 way call from 2 of their brothers about their new business venture involving a burger, government cheese, and a questionable logo for said venture. It’s a done deal and the the restaurant will be opening later that day. You won’t believe what happens next…a transformer cow extra on set overhears the conversation and is PISSED, tells their cow-nterparts, and break out of their corral. Our protagonist has no choice but to jump on the only remaining transformer stallion to avoid getting trampled to death.

Here we are – the horse-riding protagonist has put their hooved transformer friend into hyper speed trying to lose these cows. Yeah, there are multiple cows chasing our protagonist. There are only three of em total but they’ve transformed into some type of high speed bovine and are extra angry. Clouds of dust are rising toward the blue sky and the well manicured dirt road has turned into a path of pure destruction. Lucky for everyone involved, the path leads straight to Hingham, Massachusetts. Y’all are probably wonder what in the hell is a Hingham? I think it’s an ancient grain but what do I know.

The path to Hingham is nearing its end and the clicking and clacking of hooves on asphalt can now be heard in every corner of the small town outside of Boston. The dust cloud settles but the chase is still on and the cows are still absolutely furious. What are they so mad about? Are they the originators of Mad Cow Disease? Do they want to infect our protagonist? Probably not. If you were paying attention earlier, all signs point to the conversation they overheard between our protagonist and 2 of their brothers. Are they pissed about government cheese? (Google the cheese plz LOL). You’re getting warmer here, reader. Alas, they’re ticked off because they don’t want their cow-llegues to be used for meat at an establishment where an actor’s films are shown on loop and the logo looks like the food equivalent of Enterprise Rent-a-Car.

I’m having a moment of honesty and I’ll also tell you who our protagonist is – Donnie freaking Wahlberg! You were probably thinking it was Mark, huh? You know with the acting and stuff. Yeah, NO. I’m still waiting on Transformers: On The Farm to be released.

Donnie finally reaches the grand opening of his first Wahlburgers location. What a grand entrance. The transformer cows are just starting to break out their laser beams when Donnie’s steed bucks him off through the front door of the restaurant (where the first Ted is playing, btw) and immediately transforms into a 20 foot tall robot with a horse’s head. Phasers are set to stun as Horse-bot forces the Cow-bots to retreat back to the farm allowing Donnie and his brothers to have a mostly successful Wahlburgers opening. Michael Bay yells cut and the final scene of Transformers: On The Farm is complete. If only the burgers were as tasty and full of drama. At least the fries and shakes are good.

Out of 62 people in attendance, here’s how Wahlburgers fared:

Jamin M: I had low expectations but was pleasantly surprised by Wahlburgers, just like when I go see a Mark Wahlburg movie.

Megan Wood-Petersen: Tater tots + onion rings were better than the fries. Bun on burger was good, but tasted very buttery, which was borderline overpowering. So fast! Amazing service!

Talia Rubino: The burger was surprisingly tasty. I almost felt guilty for liking it so much. (I was sad they closed Cafe Med to open this place). ALSO – the tater tots were “tot”ally delicious.

Dasmarie: Dear Marky, your burgers are delicious, just like you. XOXOXO

Brayden: My burger had raw jalapenos on it and it wasn’t hot enough. As in, it wasn’t hot at all. It was a fiesta burger. It didn’t feel like a fiesta.

Ryan M. Carroll: The burger reminded me of a burger from my hometown (Southwestern CT), and that’s a good thing for me. Very tasty (but it ain’t a rarefied burger or anything). I asked for it medium rare and it came out med-well (but still tasty).

Mike Kunzweiler: The burger was everything Dirk Diggler strived to be…GREAT!

Terra Simon: The burger was good – the ample parking was even better!

Danielle Lien: I had a veggie burger so I don’t know if this disqualifies me! I had to eat it w/a fork. :/

Jessica Agranovich: I had low expectations but it was better than I thought. Not a bad burger! + the tots were BOMB.

Dan Macken: My expectations were low, just like when I sit down for a movie starring Mark Wahlburg, but I went along for the ride, and you know what? It was pretty good.

Kate Ludewig: Would have been better if Mark Wahlburg put his sweet ass in between those buns.

Tyler Kniep: Great service, but burger wasn’t moist enough. I expected the Thanksgiving Turkey Sandwich to have some dang gravy on it.

Stone: Where are the onion rings?? Tired of these skimpy guys! “Aggressively oily” – tater tots.

Dana Wilentz: The “Our Burger” was surprisingly tasty and this is coming from someone who had Shake Shack last night.

Eric Kalver: I was surprised how good it was! Felt it was a good sized sammy.

Peter Wade: Housemade thin crispy onion rings should be avoided. They were thin, they were onion, they were ring-shaped and presumably housemade. However, they were also tasteless and not crispy at all.

binks.: Ok. So, the OG “our” burger was a basic winner, but man oh man oh man – these sides. WHAT A WASTE OF CROSSFIT BLOOD SWEAT AND TEARS. Thankfully, I am going to drown my sorrows in a shake. Even the shake is flavorless! How can this be? The humanity!!

Hafter: My OFD was a greasy blob. Muchrooms ok, tomato stuff ok, burger good on their own but together just greeezy. I like that food tasted homemade but don’t think I would eat at their house again. I might call this church picnic food.

Garrett M.: Despite my crippling disappointment that Mark didn’t deliver the burger himself, I thought it was pretty good…for Boston.

Alex Valenti: This burger was from my motherland of Boston, Massachusetts, so I gave it a good score, also cuz Marky Mark and the Funky Bunch is hot AF.

Anonymous: I enjoyed my burger. It was the right size and balance. Slightly falling apart though. 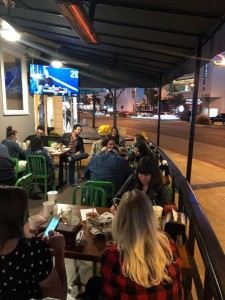 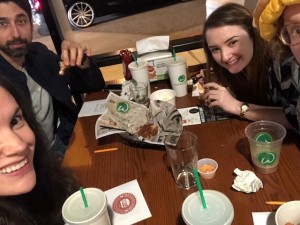 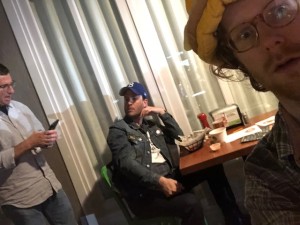 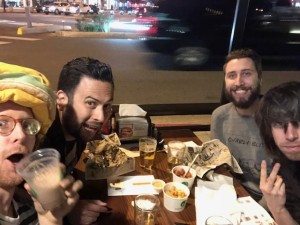 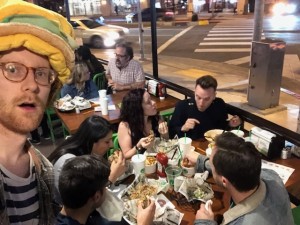 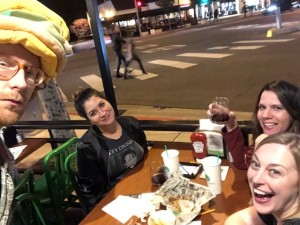 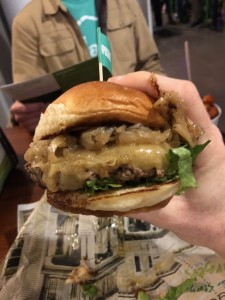 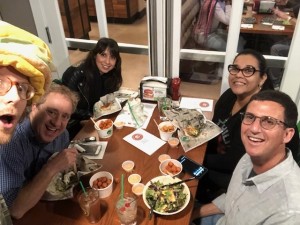 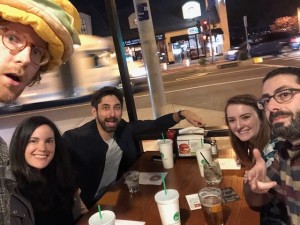 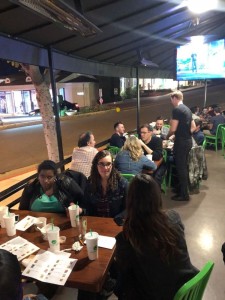 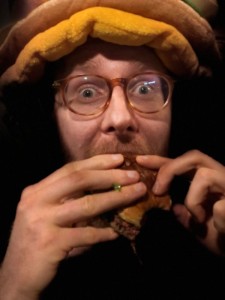 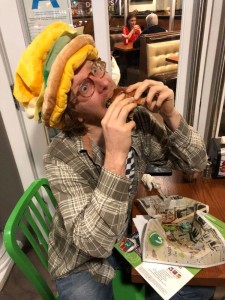 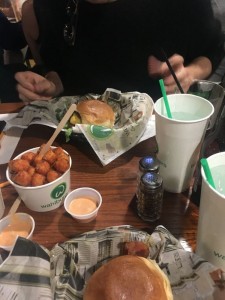 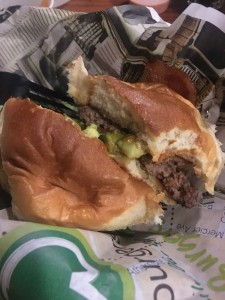 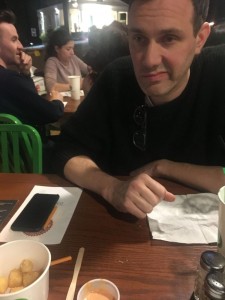