I’d like to start my review with an honest confession, one that only an honest midwest boy would make. At some point in the last two years I did what every music company does when they’re first getting started: I scoured the internet and found a music supervisor’s email address, and added that email address to our company’s subscriber list without their permission. I felt bad about it. Nervous even. Like perhaps that conniving mailchimp mascot (“Freddie”) knew my dirty little secret, and maybe when he wasn’t too busy doing podcast endorsement deals he would privately email Rebecca Rienks to let her know that I’d betrayed her internet anonymity. Honestly, weirder shit has happened.

Then, last month Rebecca spontaneously responded to one of our newsletters for the first time, and it was like I completely forgot that we had never actually interacted in any way. After finding out I was in LA for the week she invited me to a dinner to eat beef with all her friends, which seemed normal and great. It also seemed normal, although less normal, that three hours before that dinner she emailed me and asked if I would write about my meal for the blog you guys keep because the scheduled writer had cancelled last minute. When I obliged but asked for a little clarification, she sent me hyperlinks to limericks, rap songs, and porn novellas about hamburgers. Normal. Better than normal. I’m confused, but I’m in. I WAS IN BEFORE I EVEN KNEW ABOUT THE PHARREL HAT (see pic).

So here I am, reviewing a burger for a group of people that I didn’t know until I dined with them at the burger joint in Silver Lake, that, for one night only, looked like it was ready to host an underfunded wedding reception. (That’s a statement that makes a lot more sense if I had taken a picture of the table and chairs covered in white clothes)

Before I offer my review, a few caveats seem appropriate.

Caveat #1 I live in Detroit. I’m not sure how that affects anything, but it’s worth noting because we didn’t have a national grocery chain until three years ago, we’re famous for putting hot chili and raw onions on hotdogs, and most people buy their produce at the liquor store.

Caveat #2 This might be related to caveat #1, but I’ll reiterate as a separate consideration: I don’t know anything about food quality. I get dinner at least three nights a week from the Subway in the Marathon gas station down the street from my studio. Not in like a, “I’m too busy for food” type of way, just in like a “I have no self respect” type of way. This fact may actually be the reason I’m the best person to ask when you need a substitute food reviewer– I’m genuinely awestruck by anything that tastes more complicated than scrambled eggs and ice water.

Caveat #3 I’ve never had an In-N-Out burger. Like, I just typed “In-And-Out” burger here and then googled it to see if it was actually hyphenated only to find out that I had the name wrong entirely.

Ok, so here’s the deal, I ordered the “Fix on Fire” burger, which costs a completely reasonable ten US dollars. I don’t remember the price points of the menu, but I assume this is a average or below the average price, because well, that’s my lifestyle. The Fix on Fire burger pays homage to the actual fire at the Fix Burger two years ago. I should have questioned the owner more about this fire, but that seemed sad and I’m the type of person who avoids sad conversations with strangers. The Fix on Fire burger, like many of the burgers on the Fix Burger menu, starts with an Angus Beef patty. I actually just googled Angus beef, because honestly I didn’t know what separates Angus beef from non-Angus beef. I’m still not sure if I know, but I do know that this particular piece of Angus beef is separated from its menu counterparts by a distinct assortment of additives: tomatoes, pepperjack cheese, mayo, spicy BBQ sauce, breaded jalepenos, and a bun that I should probably know more about. Here’s a picture of my burger (and Jamin): 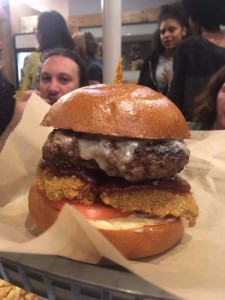 Here’s a boomerang of my burger, because I find boomerangs get more positive engagement.

And finally, here’s my review of the burger– IT WAS REALLY GOOD. I don’t really know what else to say because the only adjectives I wrote in my notebook were “spicy and flavorful.” Generally I feel the same way about food writing as I do about music writing: just give me something to put in my mouth or ears (or both) and I’ll tell you if I fuck with it or not. I FUCKED WITH THIS BURGER. This burger made me thankful I have enough disposable income to buy things that make me feel the way this burger made me feel. I felt blessed. And ill. I also felt ill. But that’s just because I rarely eat red meat.

I washed everything down with a vanilla milkshake that had my requested “hit of caramel”. I was really feeling myself in the food blogger role at this point, and the caramel request was me pushing the boundaries of what’s possible when you are have more power than the casual diner. Much like the garlic fries, this tasted exactly how you would expect– fucking incredible. Best thing I tasted in LA all week, and I haven’t tasted anything better in Detroit since I got home two weeks ago (see caveat #2).

Admittedly, there were a lot of conflicting opinions on the burgers. I talked to one diner, Jamin, who said “it’s good.” I talked to another, Michael, who had so many detailed opinions I couldn’t write any of them down. But any conflict in opinion about burgers was overwhelmingly offset by our unifying love for the cashier, Camille. CAMILLE LOVERS UNITED. She was so nice. I shouldn’t have been surprised by this after talking with the owner Paul Joo, who couldn’t stop gushing about how great his staff was. Korean born and raised in Brazil, Paul moved to southern California when he was 12. He worked in retail clothing until the financial crash. The federal government didn’t bail out clothes retailers, which actually sucks because that would have made things way more interesting than bailing out Goldman Sachs, where people continue to wear expensive ill-fitting suits. At the time Paul had one daughter and a second en route, and opening a restaurant represented a more stable way to provide for his family, which now includes a third daughter. His cousin owns Pearl’s Deluxe Burger in San Francisco, which means nothing to me but apparently something to 2,000 people on Yelp. Paul spent some time learning from his cousin before getting the credit line to open Fix Burger in 2008. Almost a decade later, Paul said he feels “blessed to be open and never wants to take that for granted. My staff is the best and I do it for them and my family. We love this community.” If anyone ever asks me about my company or my life, I’ll die happy if this is my answer. Go to Fix Burger just to soak up Paul’s energy.

I didn’t really ask Paul about food because I don’t know anything about food, but I did ask him what kind of music he listens to.

Rebecca, if you ever music supervise a Fix Burger reality series, keep in mind that PAUL LOVES MOTOWN. Just so happens I know a music house that can one-stop a bunch of Motown 😉 I’d send you a link their website, but like everything else in Detroit, it’s broken.

Thanks for letting me come to Beef Eaters United. It was really fun, and it was dope to come to a “networking” event in LA where everyone just felt like they were there to hang out with each other. You guys have a great crew. I hope you’ll let me come back.

Out of 57 people in attendance, here’s how The Fix Burger fared:

Hannah Parker: The Rodeo burger is your classic BBQ, bacon, cheddar burger and met all of my expectations.

Maeve Brophy: Best bun on the burger ever. Sick.

Paul Rocha: I really, really, I mean REALLY wanted to love this burger but sadly, it was mediocre. Dammit Gina!

Samantha: Eh. I wish I had oil blotting wipes because this shit got GREASY really quickly.

Kristen Agee: Whoop whoop! The oreo shake is where it’s at.

Alex Waters: Best part of my burger is the cranberry relish!

Tim: The company was exceptional! Enjoyed a night off of the booze.

Jon Hafter: 1. Have a drink at Hyperion first 2. Burger could be more distinct on its own, just busy stuff 3. Bun gummy 4. Onion rings on burger just added baggage (Rodeo) 5. No to chili 6. Silverlake burger was better than Rodeo 7. Loud 8. Extra points for pickle bags!!

binks: “It is louder than Jesus at a Slayer concert.” – Jonathan Hafter

Michael Persh: Unweildly! But I managed to choke it down.

Vince Villanueva: Pilgrim burger (turkey) – this gobbler was too big! Had to remove tomatoes and lettuce just to finish it. It was a little too salty and the patty – a little dry. I was able to finish it and it left me “stuffed”, but wouldn’t order this one again.

Brayden: The jalapeno poppers on the fiery burger were intense! The only complaint I have is that it was too much food, but really, does such a first world problem count as a complaint?

Jamin: This is my local burger joint. Walking distance from my house so I’m a little biased, but I think the Fix makes a damn good burger.

Sherwood: The patty was a charred flavorless puck swimming in a sea of 1,000 Island. Thank God I asked them to hold the mayo.

Vitaly Shenderovsky: Got the “Fix on Fire” burger. Subbed beef for buffalo! Was not disappointed.

Ryan M. Carroll: The mint shake was a delight!

Mike Torres: I was too afraid for this burger because everyone at my table ordered it. It was like Batman vs Superman, all fluff but no flavor. 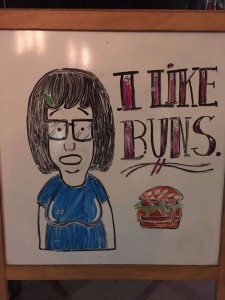 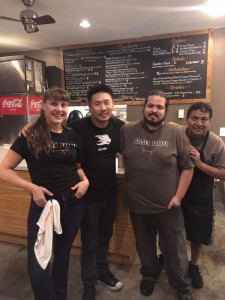 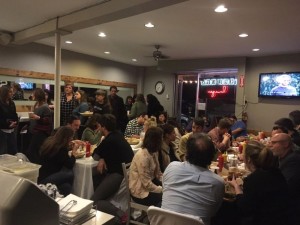 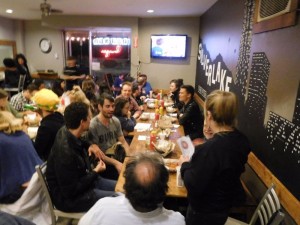 A whisper of spice dances delicately on my tongue…and then she was gone. 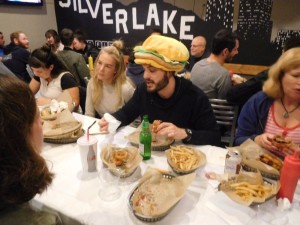 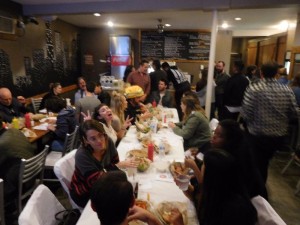 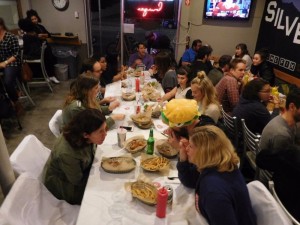 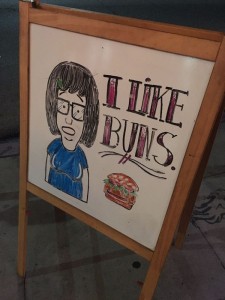 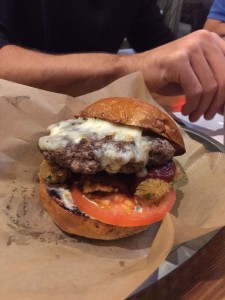 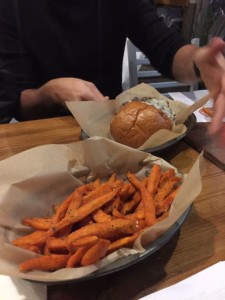 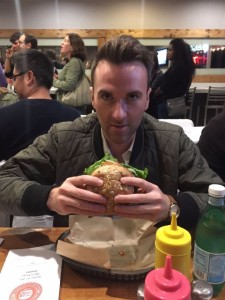 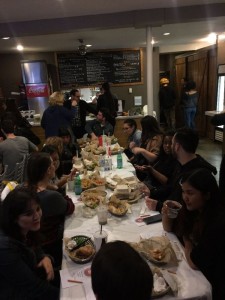 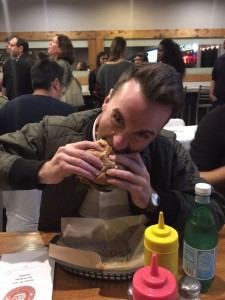 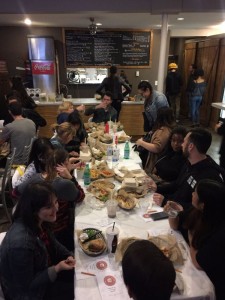 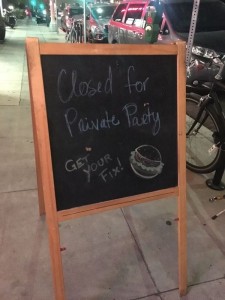