The second thing I noticed was that I was caught in a game of parking lot Tetris after trying to get into the adjacent lot, so just park on the street. Now on to the burger…

I ordered the namesake True Burger – basically a top shelf bacon cheeseburger – and Pakora Onion Rings – even more basically onion rings. The presentation was simple, with the ample and spongy buns hiding the rich ingredients beneath. The twist of “bacon jam” and “onion straws” unravelled deliciously with the full-bodied cheddar. The savoriness lingered nicely and the structural integrity of the the burger remained steadfast until the last bite. They also recommended a medium preparation and the middle was a nice reddish pink, so another plus for that. Definitely a high umami factor on this one, though it registered a bit on the sweet side for some. The onion rings were also served with a couple good dipping sauces and the fries were just fine as well.

But it was as I came to the end of my burger frenzy that I was struck by a sense of sadness and envy coming from the far end of our long table. Alas, several of our friends were still burgerless even as we joyously finished ours, their dinner left behind by a kitchen “gangbanged by burger orders”. To be fair, there were really a lot of us (like 30+ even?), but needless to say their appraisal of the service was as subpar. I can appreciate this, but the staff was friendly and conscientious overall and even let us (and by “us” I mean my generous table mate Mr. Monty) know where to get beer before we got underway as they are BYOB. So I guess the moral is – don’t roll too deep and bring beer.

Finally, of the other burgers contending with the True, both the Carne Asada and the Italiano got good reports, though the Brunch burger was apparently not quite at the True level and the veggie burger was a total no-go (though that’s to be expected, really).

It was a pleasure and honor to don the burger hat – many thanks!

“I’m worried that our server was terminated because she told us we could bring beer” -Aaron
“True Burger blew the Brunch Burger out of the water.  True Burger was exxceptional, though.  Deee-licious.  Truffle fries were great and the bacon jam was phenomenal.  Especially dug the honey-ginger vinaigrette fries dipping sauce.  Spicy!” -Rebecca
“3 words – essence of bacon” -Priya
“Bacon Jam is amazing” -Rob
“The jam was a little sweet but other than that it was tasty!” -Lindz
“Thumbs up to the onion straws” -Roxanne
“Overall a solid burger.  Good bun, well cooked but pricey.” -Benjamin
“I want to put this bacon jam on all future foods…like tomorrow morning’s oatmeal! Mmmm!” -Jacqueline
“The Burger was dwarfed by the bun to the point that the first bite I took had no patty in it.  The bacon jam was the highlight of the burger.  The service was shockingly slow.” -Michael

Out of 30 total BEU members in attendance, here’s how True Burger fared: 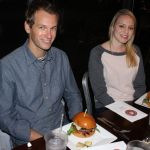 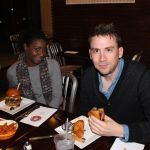 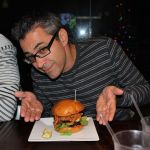 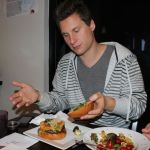 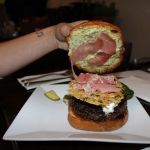 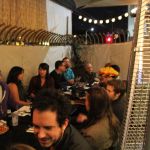 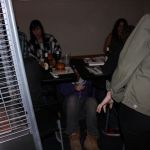 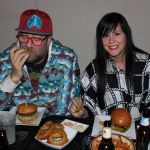 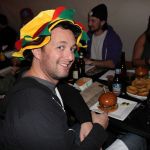 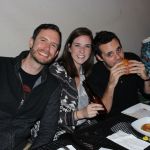 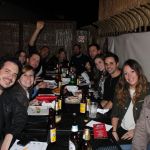