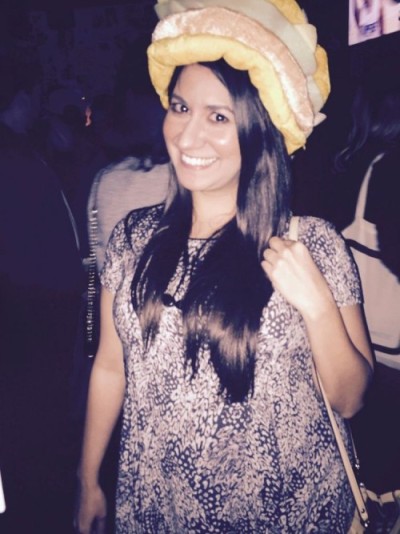 When I was given the great honor of being asked to blog for November’s BEU, I didn’t think about the fact that I was in the middle of a gargantuan move, or a week-long trip of meetings overseas was planned for the very next day. I just accepted, because, let’s be honest, who doesn’t find it to be an honor to write about an experience involving juicy fatty beef, enjoyed with people I adore dearly. I figured I’d show up and do a quick scarf-and-bail, since I was seriously procrastinating on all sorts of packing that was looming and taunting me in my dreams (ah, nightmares).

But oh, was I very wrong. Upon entering the room at The Holloway, I could tell this would be no ordinary BEU experience. What I’ve typically found to be the lovely smiling faces of the group tucked nice and neatly in an organized, pre-arranged table, turned to be a hodgepodge of bearded strangers packed into a room, shouting and shooting whiskey. I had to be in the wrong place. These aren’t my people. What’s going on? Just as I was turning to leave, I almost ran head-first into my coworker John, and the lovely Alison from Aperture. “Nope, you’re in the right place!” They declared with amusement upon seeing the twinge of confusion and panic on my face. “Get in line and order your food at the bar immediately because they said it’s going to be at least an hour wait”. Oh geeze.

As the realization creeped in that there was zero amount of packing getting accomplished that evening, I put my game face on at bar to review the menu amongst some familiar faces. I had already spent 25 minutes circling for parking until a space at the trusty lot for The Echo finally opened up, so I was in dire need of a libation. This will be fun actually, I thought. Everybody milling around so none of the awkward musical chairs going on. Plus, the heavenly smell coming from the kitchen was singing this would be worth the wait, in a smoky-sweet jazz voice, no less. I had already resolved that I wouldn’t be leaving anytime soon, so once my Pinot was poured, I was on to my next task: finding that damn hat.

I love that hat. You love that hat. I was blogging dammit so I’m wearing the damn hat. Plus, I needed a place to put my order number so it would be visibly displayed since I was definitely going to be bopping around for a bit. Upon finding Brayden and being crowned Chief Burger for the night, I inserted my number in the top and reveled in all my Mad Hatter splendor. Don’t deny it, looking ridiculous can be so much fun.

In much less time that I even anticipated (probably since saying hellos and chit chat made the time go by quickly), the food started pouring out from the kitchen. The satisfactory grunts I heard around the room showed that everyone’s grumpiness about wait time was slowly drifting out the front door, along with the members of the Whiskey Tasting group that was sharing our space for the night. As the room shallowed out slightly, I took a long look at The Holloway burger as it was placed down in front of me. It was well past Nine at this point and I was starving. Oh sweet Meat.

Now to me, the most important thing on a burger is the cheese. If you know me at all, even in the slightest, you know that cheese was baked into my DNA. If the meat of a burger is it’s Heart (sometimes literally for you adventurous ones – Ew), then the cheese is its Soul. Good cheese makes a burger go from, little ditty about girl-next-door Diane, to Lovely Rita Meter Maiddddd….

I digress. So, let’s just say that even though my burger was pristine in appearance, I was a slight disappointed that I didn’t see or smell the cheese a-flowing. You’ll be amazed to hear, however (and I even surprised myself), that I forgot all about the cheese after the first bite in. The BUN! Wow was that delicious. Spongy and soft with a nice browning, it almost reminded me of a Hawaiian sweet roll. (God those are good). Maybe it was a Hawaiian sweet roll. Who knows. Either way, the preparation and the cook of the patty was definitely to my liking, and Baby’s Burger definitely had Back. The big buns on this guy definitely had me sprung. (sorry, I had to go there.)

So the takeaway from The Holloway, even though service was slow and parking was a Freddie Krueger nightmare, was that the vibes were flowing and the burgers were on point. I probably wouldn’t be back specifically for dinner, but it will definitely be on a happy hour pit-stop before any Echoplex visits.  I almost forgot to give Brayden his hat back.

Out of 21 people in attendance, here’s how The Holloway fared:

“Christmas lights before December” beat out “Halloween decor past October” in the “Who would win in a fight?” category.

Garrett M.: “I showed up early and thoroughly enjoyed my experience. Obviously the cool kids show up early to the party.”

Dasmarie Alvino: “Buttery buns make my buns buttery. So packed, but they pulled it off!”

Sally Chung: “Tasty burger but not worth the price. Patty was seasoned well but the bun was too big. Didn’t have the burger wow factor I was hoping for.”

Cheapshot: “Brayden really shit the bed on this one.”

Jessica Ruoti: “I was generously given ½ burger to share due to the overpopulated restaurant. Burger was way dope, service was lame. SOZ bbs.”

Jumee Park: “The burger itself had buttery, salty edges, so good. Just give me a bowl of those.”

Aaron Monty: “Sometimes you think you’ve met the burger/buns of you life then a magical new piece of meat with smoky ketchup comes into your life and your world is changed. Love you, BEU.”

Talia Rubino: “Burger was tasty. Had it protein style (no bun). Not $12 tasty though. If I’m paying $12 for a burger it should come w/fries, just sayin’.”

Binks: “I’ve already mom-glared-I’m-not-mad-just-disappointed Brayden for screwing the pooch on this one so hard. But, yes. Let’s just go on record and say that Brayden now knows how reservations work. Maybe.”

Brayden: “Look, I get it, I screwed up. Who knew there’d be a 100-person whisky tasting club present at the exact same time? But you know something. Even though most of us had to stand, and the only tables that could seat most of us were taken by two people (comfortable, much? Hope those two had major anxiety about it), and it took an hour to get to us, we all got our burgers. And in the end, wasn’t it worth it? (Answer: almost not)”

Liana G.: “Too much bun. About bite seven I finally reached the meat. For a bar burger it was pretty flavorful.”

Jamin: “Yeah I ate that burger. It was pretty good…cooked perfectly, but it’s too damn crowded here.” 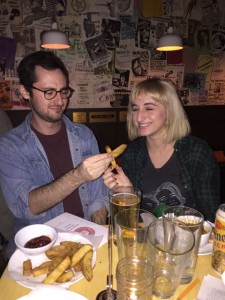 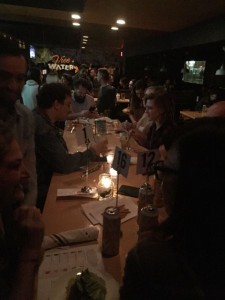 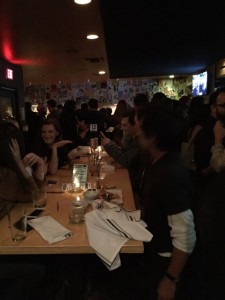 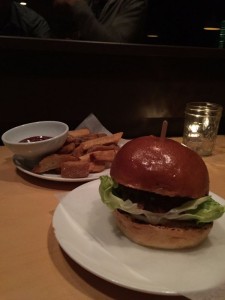 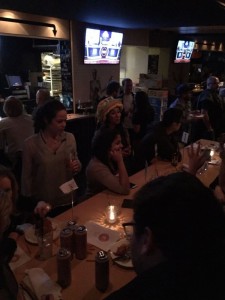