I’m pretty sure they had a sign, and they aren’t located in an alley…but it was still very much like that scene from Swingers. Well now that I’m thinking about it, it was NOTHING like that scene in Swingers, but it was a pretty cool opening sentence for this blog, right?

Anyhoo…I really didn’t know what to expect when we first planned BEU #13 at The Escondite. It has a Spanish name, but I was too l lazy to look up the definition, but from the looks of their website they had a really cool Western motif and one of hell of a creative list of burgers. Most of the hamburgers are named after 80′s TV shows and some of the non-traditional toppings include breakfast gravy, cholula, cream cheese, bananas, and Funyuns. Yeah, I said it – FUNYUNS! If you don’t know what a Funyun is you either need to go back to your home on Planet Zeernox or stop being a hippy. I digress…

The Escondite is located off the beaten path of Downtown Los Angeles. They have a good size parking lot and a triple-bitchin’ patio. The inside looks like a darkly lit “cantina de Tijuana” (that means “cantina close to Tijuana” in Spanish) except they don’t serve tacos and instead of native Mexicans, picture a bunch of tight-jean wearing hipsters. As I was standing there boring the living piss out of Chris Jackson with that old “Cheapshot charm” I noticed Ice T’s “New Jack Hustler” and Led Zeppelin’s “Ramble On” on the Escondite’s jam-box which shows they have good taste. After about 20 minutes of boring the early arrivers to tears with some of my high-school antidotes, we were seated promptly on time to the Beef Eaters United area. Due to the threat of rain, this wasn’t one of our biggest turn outs, but it was certainly one of the most fun posse’s we have had in a long time (shameless attempt to make those who couldn’t attend feel bad for not making it).

Before committing to my order, Chrissy Stuart and Rebecca Rienks, brought the daily special to my attention – “The Fat Albert” – a burger on two glazed donuts topped with bacon, maple syrup, and enough calories to turn Oliver Twist into Gaboray Sidobay. As good (and healthy) as it sounded, I decided to opt out and split two burgers with Priya Perera. We ordered Slim Pickins (cheddar, canadian bacon, bbq sauce, red onion, and Funyuns) and the Captain Kangaroo (egg, breakfast gravy, canadian bacon, hash brown, cheddar, gravy and cholula). Even with all the zany names and toppings, both burgers were beautiful to look at. If these burgers went to my high school I would have voted them “cutest couple”. The buns, in this age of the high-end-burger-revolution, were a bit generic. A regular, round, shiny bun doing it’s best Umami burger imrpession. The burgers were ordered at medium-rare, but delivered at medium which forced me to dock a couple points as well, but the taste was something special. All the ingredients played a specific role in the taste explosion that happened in my mouth. Everything tasted fresh and the way you would imagine when you read the menu.

If I had to do it all over again, I would have pointed to the fake Goodyear blimp in the sky to distract Priya and stolen the other half of the Captain Kangaroo…there was just something magical about a burger with breakfast gravy and cholula. All in all I was happy, the posse was in good spirits, and I didn’t get gas until AFTER I left which goes to show that the ingredients were all organic and farm-raised*. My PIC’s (that’s “Partners In Crime” in hip-hop slang) had some varying opinions in their score cards. Overall, everyone loved The Escondite’s creativity and taste of the burgers, but they didn’t seem to enjoy the service  or the pricing. I, as the king of the gang, endorse the Escondite and would return until I have tried everything on the menu including the Wednesday special – The Mr. Ferley – (Cheddar, mac & cheese, and bacon bits). The overall BEU scores are as follows, putting Escondite as The #1 burger of 2012 (out of two), but not a very impressive overall score. Until next time!

Here are the comments from our BEU members about The Escondite:

“Salad was a bit lacking.”

“Tasty burger.  Free Parking was a plus.  I don’t want to ruin the ending, but Darth Vadar is Luke’s father.”

“Shared ‘Elvist’ with Binks.  Not a fan.  Savored last bite of the Fat Albert.”

“This place is genious…in theory.”

“The neighborhood is a bit sketch.  I think the canadian bacon on the captain kangaroo should be replaced with well-done regular bacon.  Also, our waitress was super nice, but a little slow.”

“Tough to rate as we split the Fat Albert + the Furley.  Furley dragged Fat Albert down.  Had it been Albert only, it would have been 8′s & 9′s across the board.”

Out of 16 total BEU members in attendance, here’s how The Escondite fared: 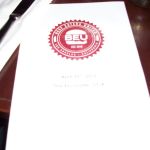 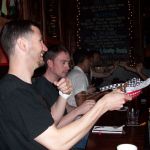 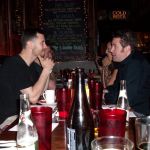 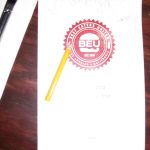 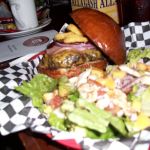 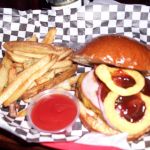 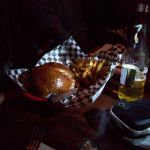 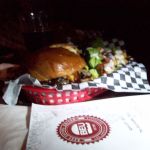 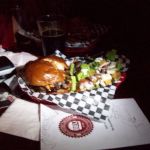 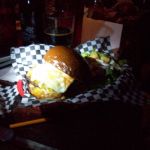 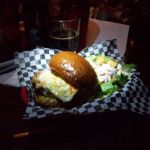 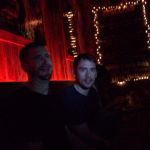