As I approached District 13, it seemed to be just ahead and to the right. After parking the car, we continued in pedestrian mode.
“Turn right,” she cooed, which brought me through an alley to the Hollywood Umami Burger.

When it came time to choose a burger, there were 3 options. Let’s break it down;
The D13 Burger is angus beef, smoked gouda, mustard aioli, caramelized onion, bacon and arugula on a pretzel bun.

The Sunny Side Up Burger is 50% angus beef & 50% bacon patty, topped with an egg, red wine braised onion, aged cheddar, lemon aioli and again with the pretzel bun.

The Veggie Burger is a sumptuous helping of blah blah blah topped with who cares this is BEU, and once again on the currently trendy pretzel bun.
We ordered the D13 and the Sunny Side with sides of Sweet Potato “Tots” and Beer Batter Onion Rings.
Wait Staff; Ready to Rock.
Wait Time; Enough to make you Really Hungry.

When the food arrives, you first notice the shiny pretzel bun which seems to promise a restaurant that is serious about their burgers. Well rounded, browned nicely with a slight crust and glossily framing a peek at the abundant beef and melted Gouda within. A quick look under the hood reveals perfectly melted cheese on a generous and juicy patty of fire cooked beef.
The 50/50 arrives the same way; all dressed up in Pretzel, but boasting a fried egg to boot.
Appearance; Hot Prom Date.

Now for the truly important stuff.
I ordered the D13 medium rare but it must have come out, “…completely cooked through and left under the fire long enough to make sure the dominant taste of this burger will be “charred”…”

The bacon, usually playing the part of the cavalry regarding any weakness in a burger, fared no better and only added to the overall sensation of eating a campfire. Also, please know that heralding Angus Beef is a marketing invention created to make you think there is something entirely special about it. My D13 Angus burger though moist, needed ketchup and lots of it, so I found no comfort, or taste in this grade of that well promoted breed.

The Sunny Side Up was even more disappointing because of the extra bang I thought I would get from the 50/50 combo of Angus Beef and… drum roll please……Effing Bacon Patty… I mean come on, what carnivore doesn’t think that sounds like some kind of mythical food-stuff you would only find at Gandalf’s Butcher Shop next to the Unicorn steaks? Seriously. Bacon Patty. ! .
Anyway, though moist and flaunting an impressive pedigree, the 50/50 was also dull and flavorless except for another generous sprinkling of char crystals and the sweetness of a wine braised onion which was an unsettling combination. Sweet and Burned. Imagine promoting that. Moving on to the sides.

Tater Tots of the sweet potato variety; good idea but would probably benefit from a more salty/savory element to offset the simple sweetness of the potato. This side did not travel well as a solo, but fortunately D13 sports some very tasty sauces. Our server suggested the chipotle ketchup and the aioli pesto mayo, which absolutely made this side work.
Onion Rings: Crispy and salty on the outside, tender on the inside, but again only made better than average by the D13 dipping sauces.
Also on the plus side, that freaking pretzel bun. Firm enough to last through the entire meal, while delivering a crunchy-soft bite that has turned out to be one of the notable food trends of 2013.

Overall Impression: I WANTED to like this place. The beer menu was healthy, our orders were taken quickly, the food was presented well & the staff was better prepared than a lot of places we’ve tried. However, all of that could not make up for charred and flavorless burgers, no matter how good the bun and sauces are.
As I was leaving D13, I felt the phone buzz in my pocket and when I pulled it out to check, I saw the map app was still on.

“Shall we go to Umami Burger now?” she said more than asked.

“This burger was all hat no pants” -M. Montiel
“Mediocre at best, but good hang, great beers.”
“Portion was too small.”
“I didn’t taste any bacon in the burger.  False advertising!”-A. Moffat
“You had me at pretzel bun.” -Kristin G.
“Meat – dry.  Bun – Dry.  Waitress – Heyo.” -Koichi
“Dry and generally disappointing.  Onion rings were good.” -Anthony
“Bun was dry & cheese not melted.” -Amine
“Dryer than 90 year old vagina.” -Cheap
“Patty was overcooked, burnt and flavorless.  Onion rings were cold.  Patty needed a lot fo condiments.  Sauces felt bottled and not that tasty as well.” -R. Thomas
“Yummy food.  Loved the chipotle ketchup.” -Cristie M.
“Beef…bacon..egg…can’t go wrong.” K. Thompson
“Oh delicious sweet tater tots!” -Josh B.
“Too dry!” -Mike Soens
“Is it wrong to say I like the fries more than the burger?” -A. Monty
“Dry burger..” -S. Rosen
“”This place was like a Michael Bay movie – the trailer looked good and then it was a giant flop.  Michael and I ordered medium and got not only well done, but CHARRED.  And this burger was dry like a hockey puck.” -Binks

Out of 30 total BEU members in attendance, here’s how District 13 fared: 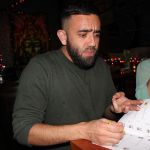 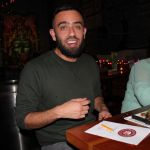 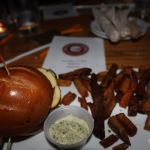 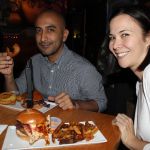 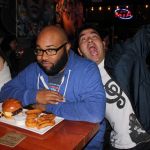 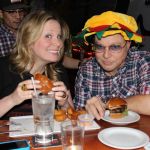