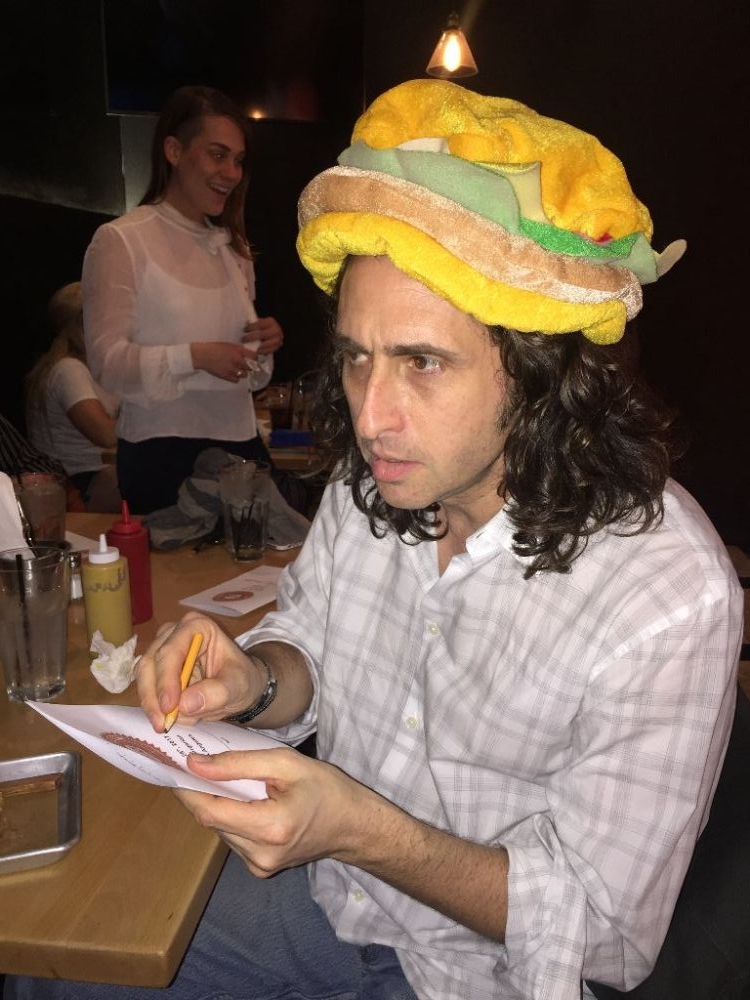 First Things: Thank you Baby Jesus for regime change. Cheap’s a nice guy and all, but his tenure at BEU was a total disaster. We weren’t winning anymore. I think sky’s the limit with new burger honcho, Brayden Deskins. When I asked how he intends to put his stamp on the organization, Mr. Deskins replied, “I’ve got big plans for BEU Los Angeles and big changes are coming.” When pressed about those changes, Mr. Deskins terse reply was only “Something terrific.”

Mr. Shot: Where the fuck was he? It’s his boy’s maiden voyage into the big time and he’s MIA. Sitting at home in his Eazy-E jammies watching the director’s cut of “Are We There Yet?” is my guess. Total loser! Cheap, if you think this vitriol has anything to do with me being nominated for the BEU/AARP Award a few years ago, the answer to that question is “oh, yeah.”

The Burgers: I see my self as a purist. No matter the location, I always get the most basic burger. I think it’s the best way to tell if the restaurant has the goods. When I saw that the Burgarian’s signature, “original” burger had ham, eggs, pineapple, and nutmeg, I got scared and built my own. But, I think that was a mistake. I think the cut of meat was inferior and I was underwhelmed. Everyone at my table seemed to be happy. So, I’ll go with that.

The Help: As far as service goes, I feel it’s hard to judge. We can overwhelm an establishment in numbers, noise and insane demands [Jon “Bunless” Rosner]. I always feel bad for that one table who comes out on a Tuesday for a quiet dinner. It’s like the one family who decides to come visit grandma in Austin during SXSW.

In Summary: I’d be very surprised if The Burgerian wins the coveted BEU/Michelin award for 2017. I think there’s better coming. But, you never know. I’ve always suspected the awards were rigged, anyway. I hope Mr. Deskins has the fortitude to investigate that. Bigly! Thanks for reading.

Out of 64 people in attendance, here’s how The Burgerian fared:

McDonald’s fries beat out In-n-Out fries in the “Who would win in a fight?” category.

Vitaly Shenderovsky: They sliced the top bun in half and filled it with more toppings…MIND BLOWN.

Chris Piccaro: I feel misled. I see “original burger” and I get breakfast items and a seafood sauce. Decent buns.

Natasha Albert: I appreciate that the veggie patty actually tasted like food and not cardboard.

Talia Rubino: I built my own burger so creativity was on point. They forgot my mustard and the egg was overcooked. The bacon was perfectly crispy and the jalapenos added a nice touch. Overall, I would come here again to try other variations. P.S. the sweet potato patties were DELISH!!!

Russell Nygaard: Bad service but perhaps they weren’t ready for this many people.

Paul: The bun was the best part. There was too much going on in The Original. Tasted more like a breakfast sandwich.

Ryan E.: Thoughts and prayers, hoping they get their liquor license.

Derek War: I wished there was a burger that had the sweet potato patty in there. Along with the custard.

John Moses: Came for the burger, lived for the custard.

Brayden: Cheapshot didn’t show. Rebecca didn’t show. People left without paying. I had to cover. There was whipped cream instead of ketchup for the fries. Where am I.

Kristin Genovese: Minus a billion stars for not having wine

Laura Katz: I mean, it was good, it just had no flavor.

Conor Aspell: This burger was full of surprises! Yeah, I know it was all listed on the menu but it was still fun. (Original burger btw). Also it had an egg. Yep, I’m not yolking.

Dondrea Erauw: I appreciated that the veggie burger was cooked w/actual veggies. It wasn’t a soy patty, which I dug.

Jessica R.: Overheard @ BEU: “I didn’t realize that the comments go on the website.”

Jordan L.: Sweet potato fries are killer but the regular fries were below average.

Koichi: Parked in a yellow zone at 8. Got my burger at 9:30. Spent an hour stealing fries and sweet potato patties. THAT BUTTER THO!!!!!

Dan Macken: For the love of God, where is my burger?

Sarah Scarlata: The mood lighting needs work – needs more dark and mysterious & less bright college cafeteria. My PTSD got sparked, I’m going to have nightmares about not being prepared for an exam…

Andrew Scarborough: What is up with the Deus ex Machina mirror in the bathroom, then no auto paper towel dispenser? Come on. 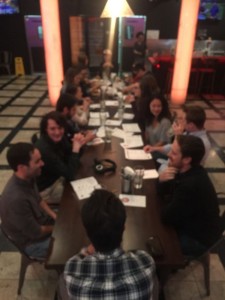 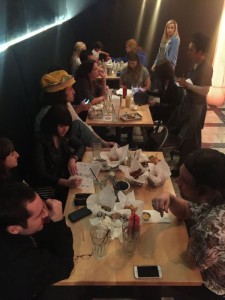