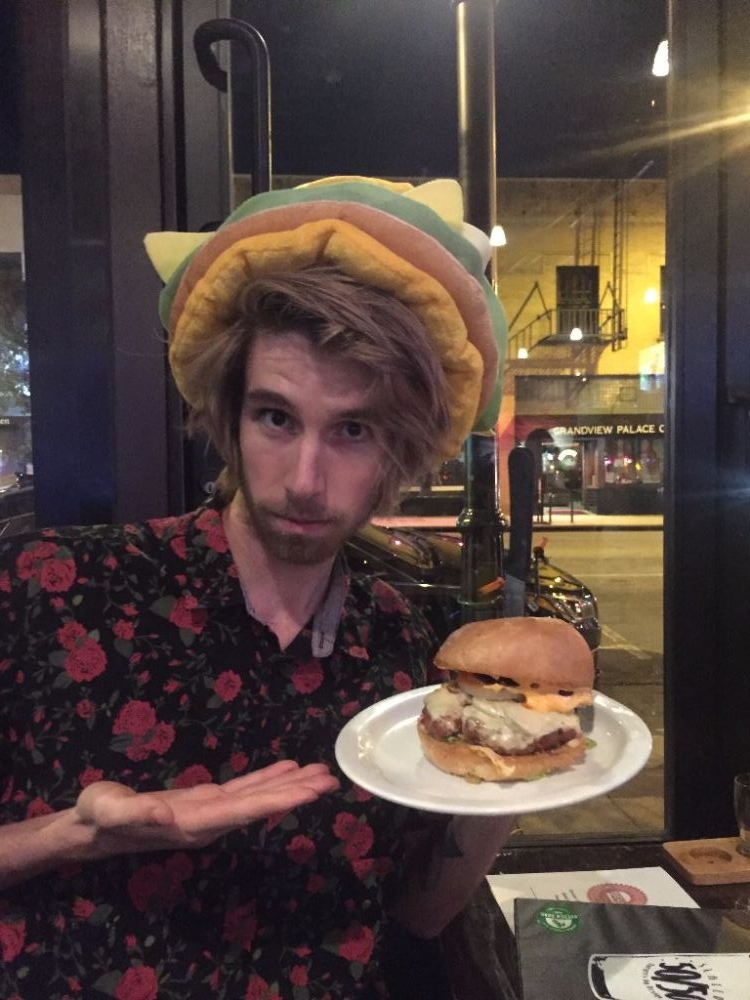 “Sorry, Mr. President, this has been great, but I have to go – I have an important matter I need to attend to. Send Michelle and the kids my love, and-what’s that? ..no, it’s not just ‘some burger place’ this time, it’s Slater’s in Pasadena. …right, but in the name they give themselves 50 out of 50, so it’s gotta be good! Look, I don’t have time for these weekly ‘fix the country’ calls you always need me for, I need to go. Goodbye.”

I rolled my eyes. Sometimes the big O just doesn’t know how to end a call. The name’s Deskins. P.I. I was newly recruited for this gig on the behest of the leader of some school club (“You’ll love the place, just check it out and report back what you find!”). I could tell the guy was cheap. Regardless, I figured it’d be a good way to kill an otherwise bland Thursday night of smoking clove cigarettes and watching hipsters parade across the wilting viaduct in the Arts District. I sighed, curled my handlebar mustache, fixed my monocle, and entered Slater’s.

I was immediately greeted by three incredibly pleasant sensations – the aroma of cooked bacon meandering throughout the building; the dozens and dozens and dozens of glistening rows of beer on tap; the welcoming smile of Heather, one of the handful of spectacular waitresses that would be accommodating the group I’d be meeting for the evening. Once I was seated amongst bright and hungry faces (and found my detective’s cap replaced with a less-than-inconspicuous burger hat), I noticed that the menu and beer flight was specifically tailored for BEU; a nice touch.

After dodging questions that could’ve revealed my secret identity as a detective (“What was that detective hat for?” / “Why the monocle?” / “Who the fuck are you again?”), and being saved by the arrival of our food, I felt something rise in the pit of my stomach. Excitement? Gratitude? Nope, just the return of leftover seafood, unwittingly eaten just hours before the case. Good. After a few trips to the restroom (yes, see-food does mean two things at once), I was the one feelin’ 50 out of 50. Rejuvinated, I joined the table, and dove right into my Sriracha burger and Slater’s fries. Heavenly. I began typing on my detective’s standard-issued 1927 Remington typewriter:

“Perfect patty. 50% bacon + 50% beef = 100% of everything I ever wanted in a burger (“Is that guy…is he using a typewriter? He brought that?”). Bun perfectly held the sauce, slaw, onions, and thick slabs of caramelized bacon in place, each of which was imbued with sriracha, like some mad scientist’s concoction (“No, seriously, that thing is loud. What’s his deal?”). The fries were well-seasoned, but it was the bacon-ketchup that sold me – chunky and delicious, and definitely a welcomed addition to the already excellent plate (“Dude. Can you, like, stop?”).”

Satisfied I had enough to report back with, I began heading out with much applause from my fellow burger companions. As I smartly headed out the door, I gave our waitresses one last thank-you for being so helpful and timely to the entire party. My report’s summary, verbatum: “Don’t worry: it’s never a 50/50 gamble with Slater’s; there’s a 100% chance of you loving it.” To the embarrassment of passers-by, I gave a salute to a nearby American flag, whose stripes reminded me of the many strips of bacon I consumed during my time at Slater’s – awe-inspiring, perfect, wavy. People honked at me to get out of the middle of the street. I rode my jalopy into the sunset. Case closed.

“Poor Man’s Iron Man” and “Spider-Dad” tied in the “Who would win in a fight?” category.

Garrett M.: “It was everything I wanted and more.”

Bianca Valencia: “This was my first BEU! I ordered the 50/50 and my taste buds are very happy!”

Koichi: “Heather rocks. Should have worn my sriracha costume!”

John Moses: “While ‘Poor Man’s Iron Man’ has Beer Muscle and Cardboard-tech on his side, Spider-Dad would undoubtedly be fueled by his primal instinct to protect his spider-kids and his tired spider-wife, thus defeating his hefty opponent with thick sticky web goo.”

Sam H.: “Burger was pretty good, beer flight was a great novelty, but the SERVICE WAS ANGELIC.”

Ali Dannenberg: “The burger was OK but service, french fries, beer, and the beautiful company was a LOT!”

Kristin G: “I’m thoroughly impressed at the quality of these patties. Sherwood’s gonna be pissed he missed this one.”

Patrick Clancy: “Wow, it’s so good, it should come with a surgeon general warning!”

Isabel Pappani: “The bacon ketchup kinda rocked my world. Bun was a little greasy..had the 50/50 – eat it up quick or the egg gets too cold. I feel barfy-full.”

Aaron Monty: “Everything I put in my trap was superb, even my fingers with extra bacon ketchup. Pasadena for the win!”

Jessica R.: “The service was crazy good, so that’s rad. And there was bacon everywhere – like – everywhere!” 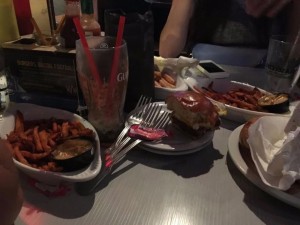 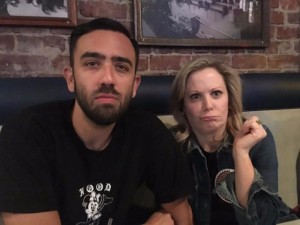 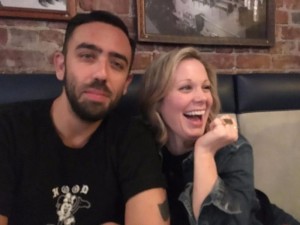 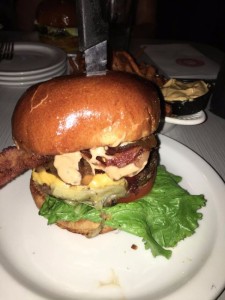 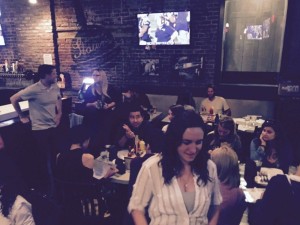 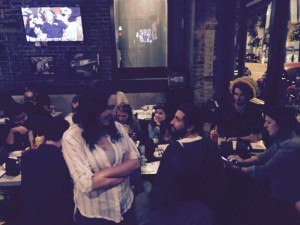 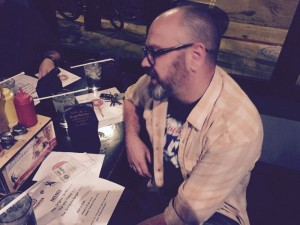 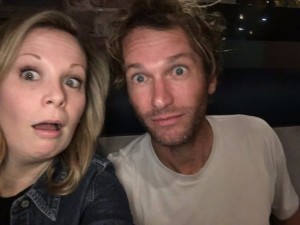 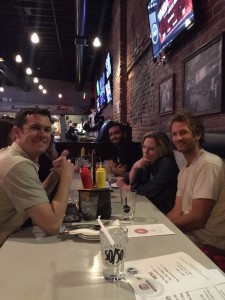 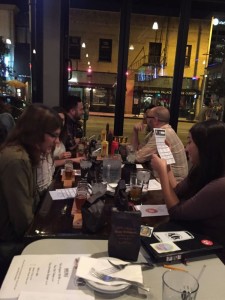 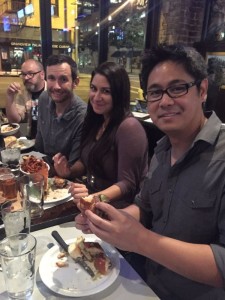 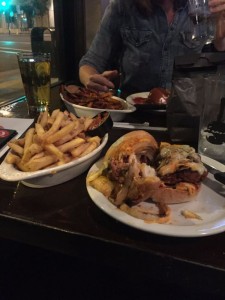 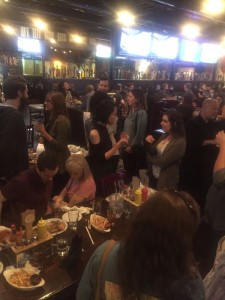