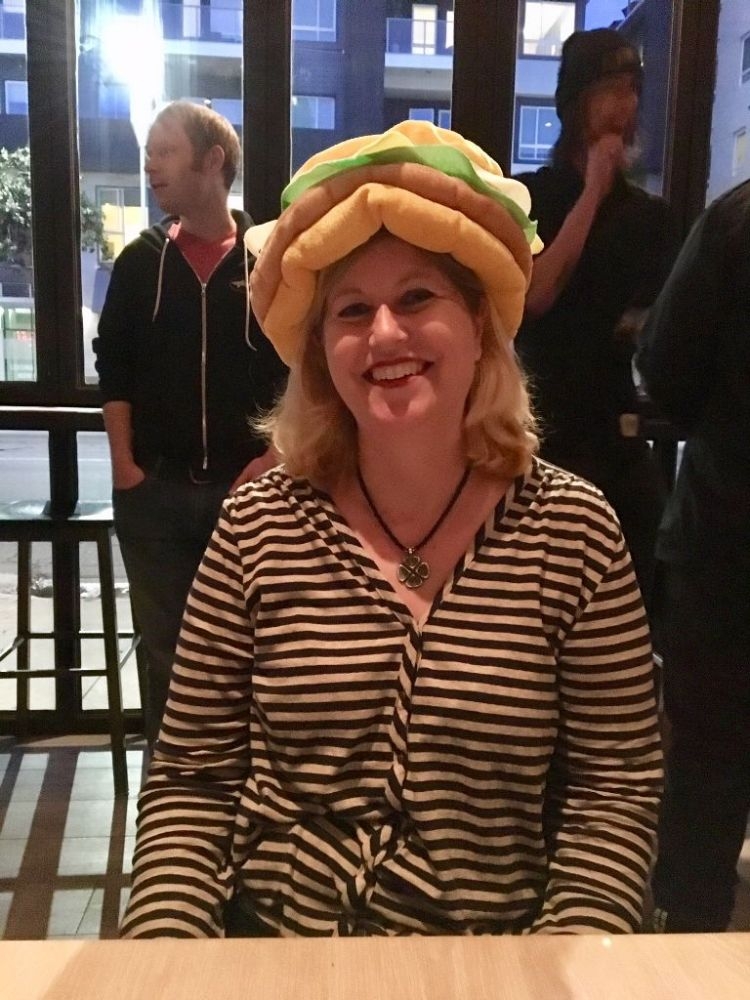 Before I get into my review, I need to address something that continually comes up at every BEU I have ever attended: The Burger Hat. It is the indicator that says, “I AM THIS MONTH’S BURGER BLOGGER AND I AM THE COOLEST PERSON IN THE ROOM RIGHT NOW!” While this is true, it makes you wonder how clean this communal hat really is. Brayden even said, “It’s kind of clean” unsolicited as he handed it to me which only deepened my suspicions. Today marks day 13 and I am here to say that thanks to the cleanliness of all of you beautiful Burger Bloggers of the past, I have not contracted lice or other contagious scalp maladies. There you have it folks, now back to the review!

Mikkeller is a name that has no real meaning to the Average Joe or Jane other than, “there is probably some really awesome microbrew here.” The first thing I did when greeted by one of their many friendly servers was order the California Dream (sweet optimism!), found under the “Crisp” heading on the beer menu. The description was intriguing – “pils hopped w/ galaxy, Simcoe & Amarillo.” I have no idea what that means other than it’s a pilsner, but I am all-in with anything that has galaxy infused into it. It had the perfect balance of full taste and a hint of fruit without being bitter which went down a little too easily. It’s the kind of beer that can knock you to the ground before you know it because you could really get lost in that California Dream.

The burger? One word, fantastic. No one flavor overpowered the other, it was a harmonious utopia where nothing was competing and all components lived happily ever after. The onion ring was so subtle you almost didn’t know it was there, the aioli moistened the bun ever so slightly, the lettuce and tomato resonated into a refreshing crunchiness, the cheddar cheese and meat were paired in such a way that they were almost one entity. The burger was all about peace and love, send that juicy cow flesh to our world leaders!

In the spirit of adventure, I ordered the Pink Frites. The magical pink dusting on top of thick cut fries comes from “dehydrated red wine vinegar” which is not an item you find in every menu. The fries had a surprising zing to them at first, but over time they became a little intense and looked like the Pink Panther sneezed all over them. As the night and mingling continued, I found my lips puckering into a reverse duck face. It was like all of the hydration was sucked out of my body and all that remained was a thick pink residue caked onto my fingers and a deep unquenchable lust for MORE BEER! ….which is usually the answer to any of life’s challenges.

Mikkeller is a winner and is a better reason to venture Downtown than the Lakers (sorry, Jonathan Rosner – Go Celtics!). Thanks to all of my burger brethren for the good times and to Brayden for giving me the opportunity to don the coveted Burger Hat. And even if I did have the misfortune of contracting lice from said Burger Hat, it would have been WORTH IT!

Out of 48 people in attendance, here’s how Mikkeller fared:

And Bud Light beat out Craft Microbrews in the “Who would win in a fight?” category.

Chris Hires: It had a pronounced “Char” flavor. Could have used more acid (mustard, maybe?)

Brayden: I love this place! Glad we were able to come – never had the burger before and it was amazing. Not half as amazing as stepping in human shit after we left though (gotta love the vibrant culture in downtown!) Still, one of the best BEU burgers I’ve had!

Matt Kap: This beef was so fresh I thought I heard my patty “moo”. However, one cannot rely solely on freshness, juiciness, and toppings and I found it distinctly lacking in seasoning.

Noah Shimbaum: Fantastic burger, one of the best BEU burgers I’ve had!

Al Sgro: Making a burger w/no bun is like saying, “Write a song, but you can’t use a I chord”. This place actually made it work, and I applaud them!

Darren S.: Patty, solid. Ratios, nailed it. Bun, keep your goddamn seeds to yourself. I don’t need em. The bun did not ex-seed my expectations. Dat meat tho. And those fries homie! Thoroughly delicious burgah.

Patrick Clancy: Burger was tasty! No sides though! Oooohhh weeeee what’s up with that, WHAT’S UP WITH THAT!

Michael Sherwood: So close to true greatness! But sadly, brought down by an overcooked patty and dry bun. The bacon, seasoning on the patty, and meat quality were excellent though.

Koichi Sanchez: The char. THE CHAR.

Jon Hafter: I feel like last time I was too generous points-wise for what was ultimately a just fine bar burger. This was better than that but I woulda liked some spice or kick. I would eat here again. My drink was ok for a batch mix. My kids really like the burger at Cafe in Oak View. Just outta Ojai.

Sarah Scarlata: The pink fries….I think the Pink Panther sneezed on my fries, hence the pink dusting. The burger was magic and the beer was an oasis of awesome!

Nyiko: My burger was a bowl of roasted vegetables.

binks: This was the Gigi Hadid of burgers – very pretty, but nothing there. A solid meh. Even a hefty dose of salt and pepper did nothing to resurrect flavor. Our server, however, was A++++. 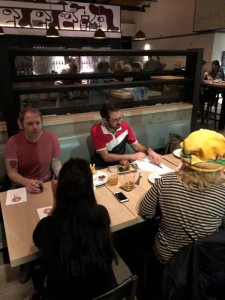 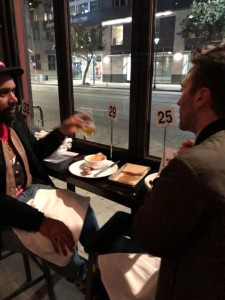 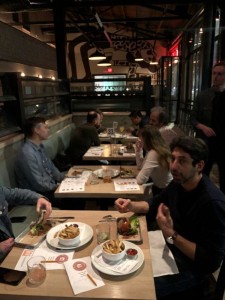 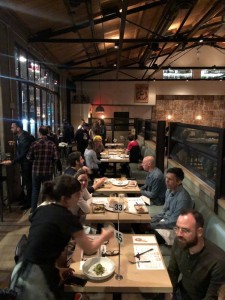 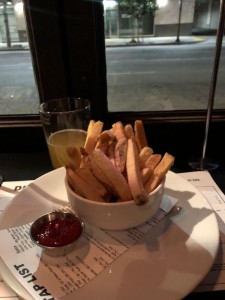 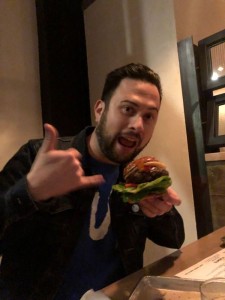 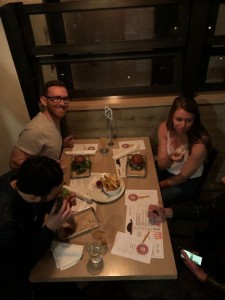 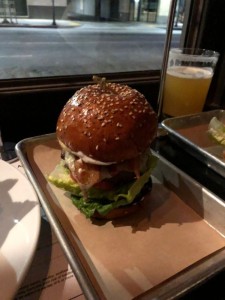 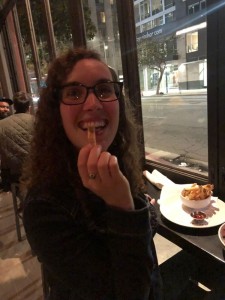 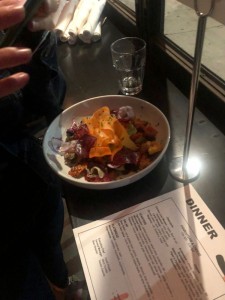 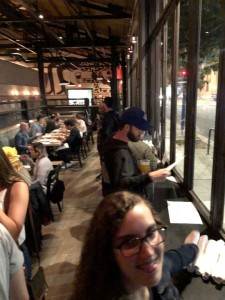 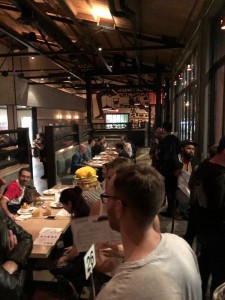 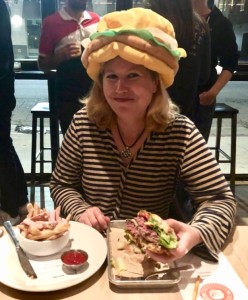 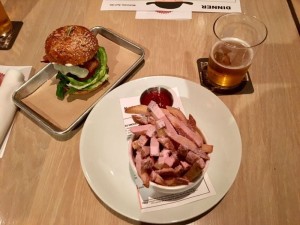 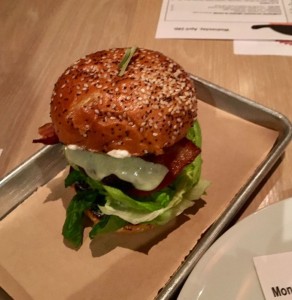 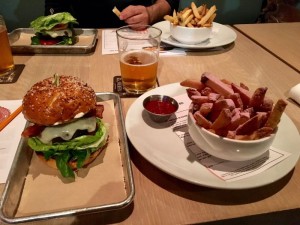 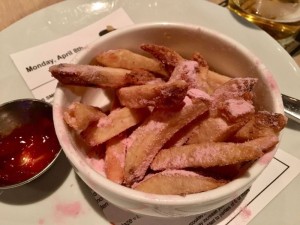 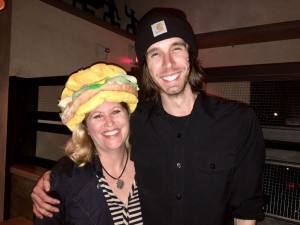