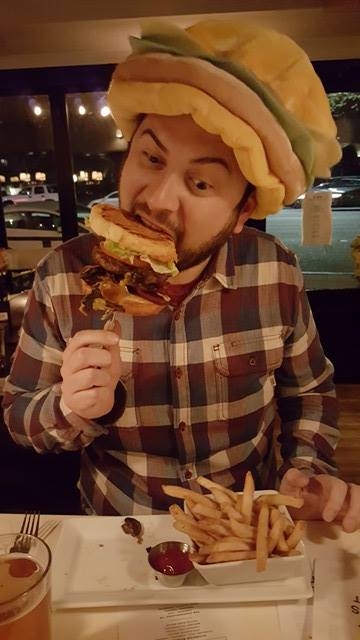 Good evening. Thank you guys for coming. I know our orfish…official 2016 Annual Burgy Awards is going to be on Tuesday, but I wanted to give you a few updates on our January Blogger Elect of the Beef Eaters United (JBEOTBEU) Patrick Clancy’s activities. But before I get to the news of the day, I think I’d like to discuss a little bit of the coverage of the last BEU gathering at Hyperion Public in Studio City.

Last month, at a time when BEU and the world was watching the peaceful transition of power and, as the January Blogger Elect said, the transition and the balance of power from December Blogger Elect, Kristen Agee (if that’s her real name), to the citizens of the Beef Eaters United, some members of the media were engaged in deliberately false reporting. For all the talk about the difference between real and fake news, two instances stand out.

One was a particularly egregious example in which a reporter falsely tweeted out that the Paint Nite Group had been forcefully removed from our private room and sequestered to the front of the bar. After it was pointed out that this was just plain wrong, the reporter casually reported and tweeted out and tried to claim that a Hyparp..Hyperion Public manager must have just been standing in front of it, accidentally blocking anyone that looked like they weren’t BEUican enough from entering our dining area. This was irresponsible and reckless.

Secondly, reports of the night’s proceedings were intentionally framed in a way to minimize the amazing service and quality of food that we all encountered at Hyperion Public. There were claims that the accuracy of the burger patty’s desired temperature, freshness and overall taste varied from person to person which is a blatant lie! Let me make this abundantly clear. This was the best ever burger-eating experience in the history of burgers –period — both in person and around the globe.

We do know a few things, so let’s go through the facts. We were given a menu created just for our event with these 5 choices:

You can see below there are 2 columns. The appropriately positioned left column is what the corrupt, I-gotta-fancy-GED-and-totally-get-all-those-cartoons-published-in-The-New-Yorker media claims that the JBEOTBEU said about his experience at Hyperion Public; while the faaaaarrrr right (meaning correct) column is what actually happened and there is no reason to question it, Period.

These attempts to lessen the enthusiasm of the BEU event are shameful and wrong.

There’s been a lot of talk in the media about the responsibility to hold Patrick Clancy accountable. And I’m here to tell you that it goes two ways. We’re going to hold the press accountable, as well. The BEU people deserve better. And as long as he serves as the messenger for this incredible movement, he will take his message directly to the BEU people where his focus will always be.

And with that, a few other updates from the day.

Tomorrow, the Blogger Elect will attend this year’s Burgy awards in which he is nominated in all of the categories. The next year’s bloggers will then have an ethics briefing, a briefing on the proper use and handling of BEU blogs. Thank you guys for being here tonight. I will see you on Tuesday.

Out of 60 people in attendance, here’s how Hyperion Public fared:

Blink 182 beat Weezer in the “Who would win in a fight?” category.

Natasha Albert: I can’t fill this out. I didn’t get a burger and I almost died from the jalapeno.

Garrett McElver: Say it ain’t so, I will not go. Turn the lights off, this burger carries me home.

Koichi: The top bun was soft. This is an alternative fact.

Mallory Strong: Meat tasted AMAZING! Doesn’t need the bacon, barely noticed it. PS, Nickleback isn’t that bad. “How You Remind Me” is A CLASSIC.

Vitaly Shenderovksy: It’s in the valley – so that’s good. The burger – not so much…

Jamin: I’m just still mad that we went to the Hyperion Public in Studio City and not the one down the street from me…on Hyperion Ave.

Andrew Wixen: This burger was not good enough for a witty comment.

Sherwood: My hopes started high with the griddle-smashed bun but were quickly dashed when I realized it was much larger than the patty could support, leaving me with a structurally-unsound burger. The bacon was disappointingly leathery, and the patty didn’t taste very freshly=-cooked, despite being a perfect medium-rare. Honestly, the mushrooms stole the show, which should never happen.

Celeigh Chapman: “Why did I rate the bun so low?” I like big buns and I cannot lie.

Samantha Schilling: I appreciate the effort, it just feels unexciting and under seasoned. I know it’s hard to cook for so many people at once, but execution could have been elevated. Bacon was not crispy, patty raw and the burger did not taste fresh…

Anon: I got the veggie bahn mi, which was not that burger-like, so include this poll at your own risk.

Willa: Just popped my BEU cherry! It wasn’t everything I dreamed of. I had to send my burger back TWICE! Third time wasn’t exactly a charm, but prob superior than my table mates & they comped moi! Let’s be more discerning next time.

Mike “It’s My First Time” Kunzweiler: It’s the kind of burger you order when nothing else looks good…it’s not bad, but it’s not anything special either. 7/10.

Leah Bublis: On this day, 1/31/17, Kayla Masnek gave details about doing yoga with a shirtless Chris Pratt, so the burger was pretty good.

Geoff Siegel: I think I made a mistake by ordering the turkey burger (“The Cali”). It was fine, but a turkey burger is always a compromise – I’m in a shame spiral.

Aaron Monty: Sometime when we munch, the honesty’s too much.

Talia Rubino: The burger satisfied my craving. But honestly, $18 is a lot to pay for some meat in my mouth. The company was good, love seeing my peeps!

Kayla Masnek: The burger came with fries, all burgers should come with fries. A burger and fries goes together like peanut butter and jelly.

Jessica Ruoti: We kicked out a 13 year old kid’s birthday party so we could BEU all over the place. We were a cool kind of obnoxious.

Michael Persh: Help me god they are discussing waterboarding at my table – how bout them Dodgers…?

Jon Rosner: When it’s 4 minutes from my house, the burger seems to taste better.

Paul Rocha: The burger patty itself was quite tasty but the bun was over-toasted (is that actually a thing? YES!)

Ryan M. Carroll: Maybe I need to avoid “medium rare”, @ the BEUs, because once again, burger was straight up R-A-W in parts.

Bradley: I accidentally ordered the turkey burger. I suck. It was boring. Nickelback is sick.

Peter Wade: It was an honor just to be nominated!…for my GRAMMY.

Binks: I vote for no things where: I am not consulted, Peter Wade is not nominated. Thank you.

Dan Macken: You win some, you lose some, this one didn’t win, but it also didn’t lose! -Dan Macken for Student Council

Brayden: The hype is real!

Carrie Marzo: I ordered the fried chicken sandwich – does my vote still count? Bun was practically non-existent but the fried chicken was cooked perfectly. Cocktails sucked. Sandwich was acceptable, cocktails not so much.

“…and don’t get me started on the crowd size!” 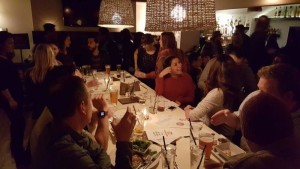 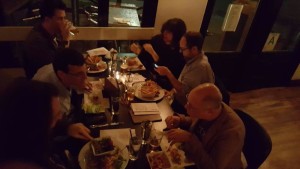 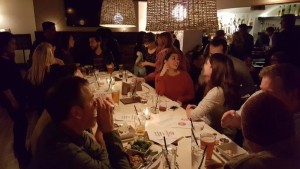 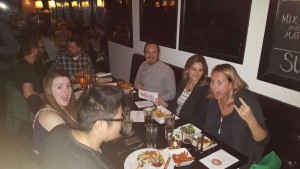 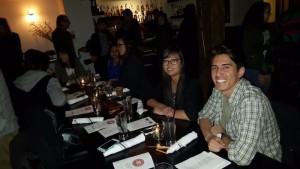