……….a sweater. Little do you know the 2012 you will actually have a real reason to want to own said sweater, but, in the meantime, you’re just pissed about having a crappy sweater and want to trip Grammy down the stairs with your Micro Machines.

Long story short (if that’s possible at this point), our latest BEU outing, to Century City’s very own SmithHouse, proved to be as unfulfilling as a bad sweater tucked in a beautifully packaged box. All anticipation, with no real pay-off.

If you’re a Top Chef fan like I am, you may already have been aware of SmithHouse, as yet another local LA joint with a menu spearheaded by a TC cast-off. In this case, Season 7’s Angelo Sosa is the one serving up underwhelming burgers, garnering the lowwwwwwwwwwest BEU score thus far. Let’s go ahead and get the results out of the way, so I can stop yammering for a bit:

Out of 25 total BEU members in attendance, here’s how SmithHouse fared:

Who would win in a fight? David Hassellhoff or Richard Marx?
The Hoff: 12
Marx: 10

As per usual, I split burgers with a fellow BEU member – the lovely Chris Jackson – in the name of gathering more intel. We shared the Cheddar Crunch (a “vintage blend of meat, topped by our proprietary cheddar disc, with house herb mayo”) and the Seventy-Thirty (“proprietary meat blended with 30% bacon in the patty, topped with onion-tomato marmalade”), both served with “signature” fries. Unfortunately, the only thing interesting on either of these burgers were the condiments. The patties themselves were fairly dry (even the one bursting with bacon), the veggies were sad, limp and lifeless and the fries were poorly seasoned. The most egregious misstep would be what our in-house Beefologist, Cheapshot, has deemed the “beef-to-bun ratio.” Or, as I prefer to call it, the Cheapshot Principle. Ultimately, waaaaaaaaay too much (dry) beef, sandwiched between a slid-shod, soggy, all too thin bun. At approximately $14.50 per sammie, I don’t think anything about my burger warranted that price, no matter how much I may like “proprietary” onion-tomato marmalade.

Thankfully, we had a huge turnout, including a bunch of new faces, so the sheer enormity of our presence should alert SmithHouse to the error of their ways. Clearly, we are a force to be reckoned with. However, at SmithHouse, having a 25-top (that’s restaurant parlance for A LOT OF FUCKING PEOPLE) means you only need one waitress. Our server was obviously overwhelmed – I mean, there’s a lot riding on her shoulders, we’re a Burger Gang after all – and our collective service grade reflects the deficiencies. Not her fault. I blame the manager. Or Angelo Sosa. Or whatever jackass decided to use the word “proprietary” ad nauseam on the menu for a glorified sports bar.

Please join us next month, as we seek to redeem the hallowed name that is “BURGER” at Lucky Devil’s in Hollywood. There’s nowhere to go but up, people!

See what your fellow Beef Eaters thought of SmithHouse below:

“My bun was soggier than an utterly defeated diaper (seriously, the bun couldn’t hold together at all).”

“Restaurant was not equipped for large parties – waited way too long to order.”

“The bun lied to me.  Shredded lettuce is a nice touch.”

“No crunch in the cheddar crunch.”

“Slash watched me eat my egg burger. He loved it.” 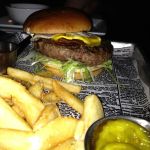 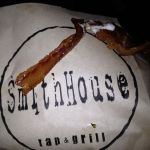 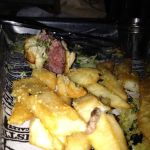 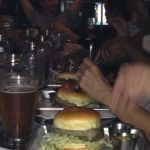 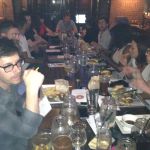 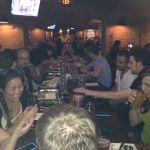 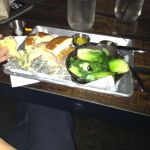 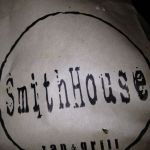 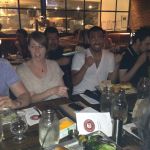 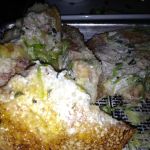 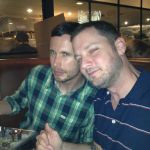 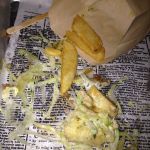 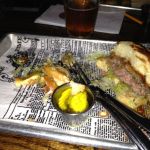 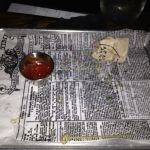