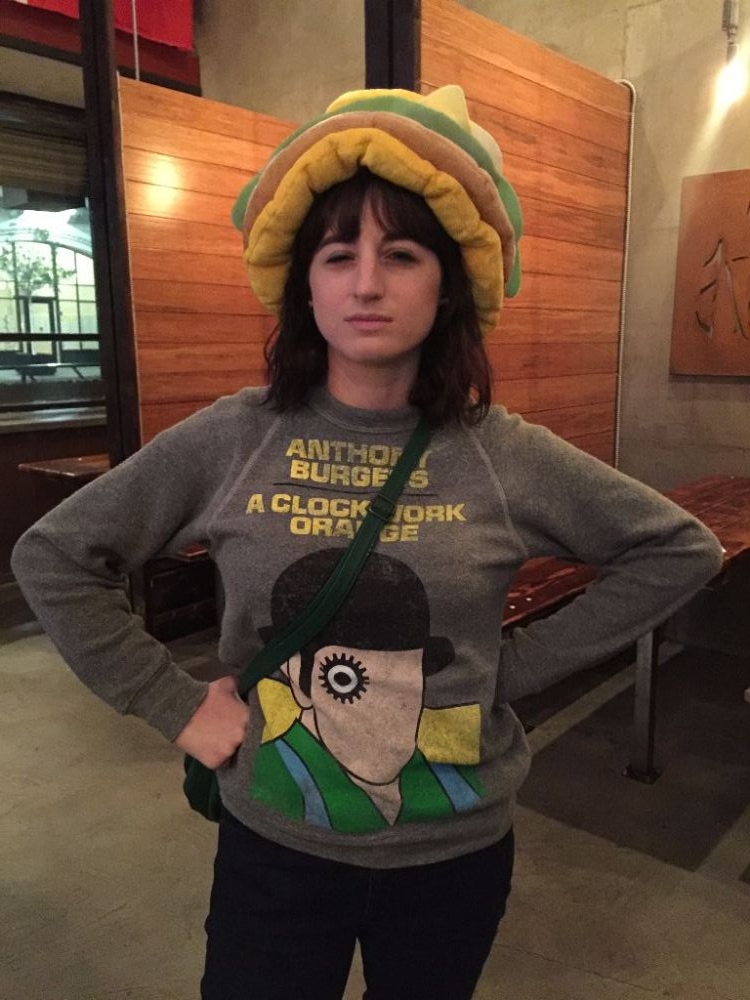 As the thought crossed my mind, my inbox dinged, confirming my suspicions. “There are 464 reasons…” read the subject line. Immediately, I was intrigued, drawn in by the simplistic mystique of the text before me. I gently moved my mouse, hovering, quivering over the message. My fingers tapped once, and the message was displayed in front of me.

“… to come,” read the beginning of the note. It was then that I knew for certain that this was exactly the kind of message I’d been aching for. “As though I need any more reasons to come,” I thought smugly, remembering fondly past times I had come. But then I read on.

The message appeared to indicate some sort of underground club—the seedy kind, the kind I had been searching for of late. Seedy with a hint of… sesame. The sprinkling of white dots against soft, warm buns. I was already getting excited.

The note was unsigned, referring only to a “Cheapshot.” This “Cheapshot” informed me that we would meet the following evening, under the cover of the dark night, for the cleverly-titled “Beefeaters” club. I chuckled at the name: clear enough to tell me exactly what would be going down, but vague enough to not arouse suspicion from any stray eyeballs that may wander across my computer screen.

Time: 8pm. A bit early for the type of rendezvous I had in mind, but surely the boss wouldn’t mind me cutting out a bit early for such a necessary cathartic release.

Place: The message cryptically specified the location as merely a number: 464. This “Cheapshot” sure knew how to make a gal curious…

That night I tossed and turned. The curiosity of the note and its impeccable timing holding my imagination hostage, imagining the sensual debauchery that was sure to come the following evening.

Upon daybreak, I checked my messages, only to find a note from my friend Shannon.

“Are you coming tonight?”

Just past 8pm, Shannon and I arrived near our destination, in the safe and beautiful bowels of skid row. Although parking at first presented a challenge, we found ourselves slipping into a tight space near the rear of the building, not at all far from the main festivities.

464 S. Main Street. We were finally there. In my imagination, this place was dark, moody, at times even unsafe, not unlike the surrounding neighborhood. And yet as we spread the doors open before us, we were greeted with a brightly lit room; minimal in design, raw concrete, metal, and slick wood. The space was unadorned, naked almost, baring itself to me in its most stripped down forms.

While at first the mood seemed quiet, I quickly realized that groups of my friends and colleagues, fellow recipients of the mysterious letter, were huddled in small groups in various booths. This immediately struck me as something unique compared to other gatherings of this type; generally, we are gathered in fewer, though much larger groups, causing us to have to yell to be heard, or to stretch our limbs across long distances and many bodies to touch one another. Conversely, 464 had us in groups of about 6 each, save for one long, sturdy table in the center of the room. The dank, dark space of the Holloway had me sandwiched between warm bodies all night; the passionate, beer-induced voices inside Slater’s had me yelling, screaming to be heard among my fellow attendees. This was to be a less rowdy, loud, and crowded gathering than others I’d attended. And to be honest, I didn’t hate that.

Shannon and I waited in the strikingly long line, which allowed us a moment to catch our breaths and fully take in the “menu.” And what we saw was unlike anything we’d encountered before.

American. German. Danish. Australian. Indian. Korean. The range of ethnicities, flavors, and textures was astounding, tantalizing, and frankly, sexy as hell. It was even possible to create your own combination, taking elements from each of the exotic delights before us.

Though the line had been longer than I’d hoped, I made up my mind just as I reached the counter. “See anything that excites you?” cooed the man behind the bar, his accent making me gasp with pleasure. “I’ve had American,” I replied coolly, “but tonight I’ll take advantage of something different. Could I… taste the Danish?”

“As you wish,” he responded, handing me a number.

I found some acquaintances at a nearby booth. The booth’s occupants were already getting cozy, assessing the various offerings of flesh and meat surrounding us, lubricating their anxieties with beer and 464’s crisp, cold hard cider.

Despite the long line, the wait for the main event was pleasantly brief. Within minutes, the Danish was delivered to me. Before I even touched it, I took a moment to admire it: two hot buns, fresh and soft, unadorned with any seed; white, creamy aioli dripping between them; the medium-cooked angus beef patty slippery with its own juices; salty onion and pickled cabbage; mulberry molasses for that touch of ooey-gooey sweetness.

I took the hot meat and lifted it to my lips. In that moment, all others disappeared, leaving just me and the Danish. One girl, standing in front of one burger. Honest, starving, and willing.

The exotic flavors filled my mouth, making it impossible to tell meat from topping. Salty, sweet, warm. Chewy yet tender. Rich but subtle. Bursting with flavor, and yet leaving me wanting more, more, MORE. (Although, to be perfectly frank, the buns eventually just got in the way… the meat and its adornments was the true treat of the night.)

As I wrestled with the Danish, I overheard moans of satisfaction from all around 464, praising the Mexican, the American, and the various other amalgamations and creations being experienced by others. An unspoken consensus had been reached: this place fared well among its competitors.

Just as I reached the climax, it was all over. The Danish was gone, and I was fully satisfied. But I knew that what we shared was something truly special and inimitable.

I have no doubt that I will soon return to 464 to engage with many more of its exotic, multicultural delights. Seedy neighborhood and parking troubles be damned, the experience was unquestionably worth it. Ambiance, selection, and service in particular were all impressive, and a cut above previous gatherings.

“See you again soon,” I whispered to the man I’d come to know as Cheapshot, before disappearing back into the brisk, still night.

Reggie Watts’ hair beat out The Weeknd’s hair in the “who would win in a fight?” category.

Garrett McElver: To the surprise of no one, I ordered The Canadian. And I loved it.

Patrick Clancy: Canadian burger was the cats pajamas. I can’t think of anything clever…sorry.

Dasmarie: I think this menu might be racist, but hey, at least there is something for everyone…?

Michael Sherwood: The patties were cooked PERFECTLY. The veggie toppings were also particularly excellent. The Danish was a bit overpowered by its toppings, but still quite good, and the Canadian was delicious and creative without straying too far from a traditional burger. The weakest link of both burgers was the bun,. If you must use a brioche bun, it should really be moist, and this was fairly dry.

Matt Linsky: Denizen of the venison.

Kristen Bushnell: Wet naps. It’s what you do.

Lauren Reynaldo: I built my own burger. It was hell yeah. Patrick Buchanan handwrites in caps lock (Billy Mays) except for the “i”.

Patrick Buchanan: More questions: 1) Did the burger make you dance? 2) Did the napkins adequately clean your mess? This is not related, but I learned that Lauren Reynaldo loves McDonald’s. Possibly more than puppies. She’s lovin it.

Brian Naguit: I had the German. There was a sausage on it.

Alison Rosenfeld: Truffle fries were perfectly crunchy/not too truffle-y, but definitely on the salty side. Burger was very good – lots of toppings on the Danish made the patty take a backseat, but overall pleasantly surprised! 8/10.

Mara Schwartz Kuge: They wanted to upsell me cheese on a Japanese burger.

Binks: This place must be very good because Sherwood doesn’t know what to do with himself and is actually managing to give out some high scores. P.S. The burger of my people – The Danish – was sweet, salty, and “overpowering” (Sherwood’s word) – just like me.

Bradley Haering: I got the Mexican. The bun was a bit dry and crunchy? I DUG THE BURGER. Def need to pass out. Fries were pretty solid.

Konrad Oldmoney: Koichi would have definitely recommended this place. So seeing how he is the guru, I will follow suit. I give this place a Siskel and Ebert 2 thumbs up.

Jamin: I built my own burger…yeah I know that’s kinda cheating, but it was fuckin’ delicious. Buffalo burger with chipotle aioli, lettuce, tomato, caramelized onions, mushrooms, havarti cheese, and bacon.

Brayden: This tasted how Fall Out Boy sounded to me in high school. Thnks fr th mmrs~

Shannon Q: The fries came WITH the burgers. That is a win in my book!

Cheapshot: Fourtunately I didn’t get six, but maybe it’s cuz I didn’t four-get to drink water.

Koichi: Delicious strawberry lemonade; bomb burger; I am happy to have recommended this spot! 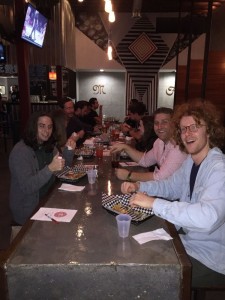 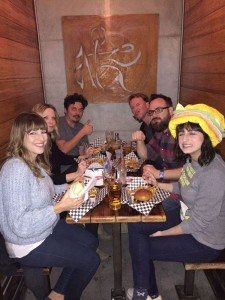 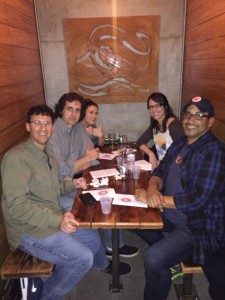 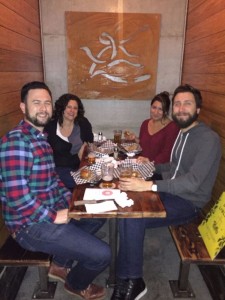 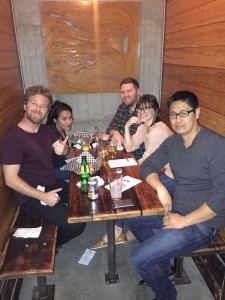